It may have escaped your attention that I’ve been rather quiet over the past week or so… which is mainly down to being in toddler hell, I mean on toddler holiday, in Spain with the entire Wally contingent… and also down to the lack of gin. AKA – my personality.

I am no stranger to the perils of the toddler holiday *shudders in memory of the turdy plane toddler and other ice cream related tales of anger…* , but this one is being carried out with a rather inconvenient uterus tenant and with WallyBubba almost an entire year older. And wiser. And faster. And shittier.

So. Here’s my tips to get through without the gin. Let us start from the beginning… 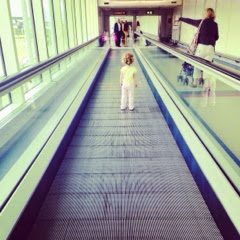 Firstly. Forget everything you ever thought you knew about toddler holidays. Without the gin numbing this shit is about to get serious. Last year’s ‘hat gate’ has absolutely nothing on the moment in the check-in queue that your toddler realises they can outrun you… *begins twitching* …be afraid… be very afraid… (and bring donuts)
Thank the living f@*k lords for airport soft play. Your first opportunity to sit down in a month. With a pasty.
Look as pregnant as possible while looking for a seat/table/place to perch whilst waiting for the plane… Then get paranoid as you board and suck that uterus back in until you are verging on concave.
During the flight convince yourself that everyone is enjoying your child’s 47-verse rendition of ‘wheels on the bus’ by not making eye contact with ANYONE. This is a good time for the remainder of those donuts. And Pringles. And sniffing the person in front of you’s gin. Which is definitely not creepy or weird at all.
Thank you Jesus of Pregnancy (actual person) for sending us mere mortals the gift of the Trunki. The saviour of toddler owners internationally at baggage carousels across the world. We bow to you. And later will make a little shrine with some leg hair and saliva and a pack of Peppa Pig stickers in your honour. That is all.
Your attempts to look floaty and serene once you’ve arrived at your Spanish end-location will only ever come off as sweaty in too much fabric in need of chips and dry shampoo.
You know that one storybook you couldn’t be arsed to pack because they never want to read it anyway and it weighs more than the actual sun…? Yeah. You idiot.
That moment when the toddler finally gives up the epic 20-hour fight against sleep and climbs into their buggy to pass out… Also known as the ‘get in’ hour (fist pump/high five optional). Aaaaaannndddddd relax. At this point consider another ‘gin sniffing’.
Mildly inappropriate alcohol consumption doesn’t actually count on holiday… You said two glasses of wine a week. And you’ve stuck to that. By replacing the word ‘week’ with ‘dinner and/or lunch’. (Or breakfast.)
Shit. Those swimming lessons have not only reversed your 2-year old’s fear of water. They’ve turned her into a kamikaze water ninja. Ready to do battle with a partly chewed swim-nappy at any time…
All routine and bed time has gone out of the window. They live only for eating, sun and naked rock pool action.
Yeah. And it can escape its cot now. F@*kballs.
If you attempt to sit down and read a ‘mag-a-zine’ at any point, it’s like a red rag to a tiny greased-up crazy-haired bull… They will commence operation pool-side-poo-party and they will defend their area to the death with their zoodle.
You can choose shoes or hats. You will never get both on them at the same time. This is Spain. Not f@*king Oz.
Spanish potty training has been going AWESOME (please apply appropriate level of sarcasm here) – our swimming pool is about 11% toddler urine and there are about three restaurants we’ve permanently left a mark on… Still. Due to the effect of damp Lycra on my ever increasing preggo-ness, I don’t swim now. And it’s not my bath water so f@*k it. #backtonappies
Also – increasing waistline is absolutely ALL down to preggo-ness and absolutely not in any way connected to early morning donut consumption. Ot midnight churros sessions.
How can one child eat that much melon…? And produce that much shit. I don’t know whether to be concerned or impressed…
Note to self. Hunt down the person who invented toddler dungarees and have them stabbed to death in the face with blunt toddler cutlery. Same applies for whoever put buttons on the back of this dress.
It’s lucky I’m already knocked up because today the toddler hurricane hit critical mass out at lunch, and mine and the nearest three tables’ ovaries actually sterilised themselves. #truestory
And finally. None of us will ever speak again of the ‘Nemo Incident’. Despite repeated attempts to rescue Nemo, there are only so many times that actual human lives can be risked to salvage a 2-euro plastic orange fish from a cliff face. And in our own ways we’ve all said goodbye and come to terms with the loss. Mostly with donuts. 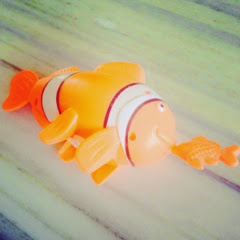