Since turning two, WallyBubba has been going through what can only be described as a period of ‘change’.

She has slowly been developing a rather serious, and potentially harmful (to others), coming-of-age condition known as ‘Toddler-Bastard-Hood‘ or TBH to us in the know… *shudders*

This condition is no joke.

(Well, occasionally… when you start laughing those slightly hysterical laugh-tears whilst rocking a bit and trying to go to your happy place…)

It effects over 90% of toddlers and is known to change even the sweetest, kindest and politest of one year olds into total ‘shits’. (technical term)

It’s not all bad news; if caught early, the symptoms may be reduced using copious amounts of gin and moderate wailing/chocolate consumption. But it’s important that parents have all the information possible in order to recognise the beginnings of this horrific disease. 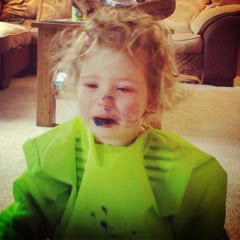