That’s right I have officially made it past the one year point and survived the first birthday. Despite the odds being stacked well against us, both the WallyBubba and I have evolved into shining examples of the human race; thanks in part to porridge, gin, CBeebies and the ‘soul-saver’ otherwise known as the Jumperoo…

How did we do it? I hear you ask. Well, you lucky bunch of blog-following bastards, I’m about to impart my secrets to you. Here are my WallyMummy tips for surviving the first year:

When people refer to maternity leave as ‘a holiday’, try not to punch them in the face. With a knife.
When your friends without children attempt to give you parenting advice, it’s perfectly acceptable to punch them in the face. With a knife.
No matter what the question** is, the answer* is always ‘I’m fine’ or ‘No, it hardly hurts at all’. Practice in the mirror five times a day. Or as many times until you can do it without flinching or laughing.
*In regard to the baby – the answer is always a rice-cake.
**For all other questions – the answer is gin.
Learn how to cry covertly… I cry while I sneeze. Fact.
Go on twitter so you slag off your shit life anonymously with a load of mums doing the exact same thing…
Most mornings I look like I’ve just had a stroke.
Most evenings I still look like I’ve had a stroke. (But with a ponytail and under-eye concealer on.)
From around the age of 6 months babies are quite surprisingly strong… mine could easily take on a labrador. Or seal-pup. And win.
Buy the Annabel Karmel toddler meal-planning books, remove the price-tags and display them when your mother-in-law comes round. Then feed them Ella’s Kitchen porridge three times a day whilst you eat hobnobs and gin.
Remember when you used to hang all their little clothes in the wardrobe, and iron things, and change their outfit two or three times a day, and it was all so cute… Well now every day is a Pyjama Day. Yay. And you can get up to three days out of each sleepsuit. Even bigger yay.
After a while, you just stop seeing the blueberry stains on the wall and the rice-cake mural on the carpet…
Don’t bother baby-proofing… they are always one step ahead of you… clever little f@*kers.
Do baby-signing classes just so you can be smug.
Yes it’s a fake cough. GOD knows where they learn that from. It means ‘look at me otherwise I’m going to go and really f@*k something up’.
Consider some kind of self-defense classes to prepare you for the human-restraint necessary to change a one-year-old’s nappy.
Just get an old remote and give it to them so they leave the Sky remote alone… Yeah, well that doesn’t f@*king work. In fact, it makes them angrier. When I tried it; WallyBubba ate my car keys and shat on a cat. The next morning, Tigger’s head was on the pillow next to me… and I mean just his head…
When they throw up, they always aim for your hair. Just as you’re going out. For the first time in two months.
Remember when you said you were going to get straight back in the gym and run everywhere with your jogger buggy? Well, your real friends are the ones that forget you ever said that. And pass you another gin and tonic.
At birthdays and Christmas buy nothing for the baby, instead buy yourself all the shit you’ve wanted over the past year. You deserve it. Baby can play with a box. Everyone wins. Except your husband. But no-one really cares what he thinks anymore…
It’s normal to be scared of your own child. It’s also normal to hide in the bathroom while they scream it out, and have a secret snickers/gin stash in the cistern.
By the time they hit the one year mark. You literally just give up on the idea of sleep. Or a life.
Note to self: re-read this list any time you are considering another baby. 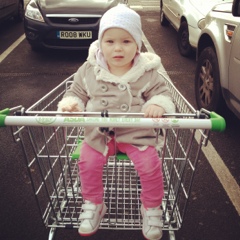