We have begun the dreaded potty training…

The precision learnings of the ‘pot that shall remain nameless’…

That glamorous phase of toddler parenting where you once again get up close and personal with your child’s bodily fluids and functions, and once again taste the shit of a human… Daily…

It’s a phase that strikes fear into the hearts and souls of parents everywhere and carries with it the burden of being responsible for your child. Nappy-less. Able to poo, pee and fiddle freely. In public. Sometimes on pavements. Or other toddlers. Or Alsatians. But mostly you.

There are many things humans shouldn’t see with their actual eyes… death, destruction, famine, your toddler’s faeces smeared across your new cream carpet and a large section of your pets… but so far here’s some of the things I’ve learnt on my potty-journey, which I now impart to you: 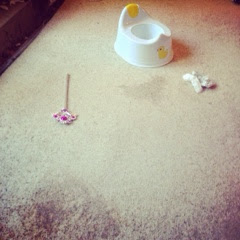 The Alternative Baby Glossary… (contains no gloss and …
March 25, 2015