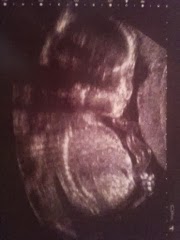 You feel like shit and your legs are the same width from your ankle right up to your thigh… but you are full of boundless optimism… You think cuddles and tiny baby-grows are the epitome of parenthood, and actually believe it when people tell you labour is a ‘constructive‘ pain. Later on, you will call these people c*nts. And stab them.
2.  Birth 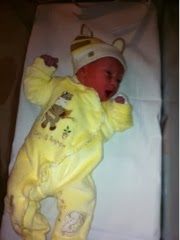 Now you know… yes. You are in the knowing club. The one where all the members have broken vaginas which have RELEASED HUMANS*. And no. IT WASN’T A F*@KING CONSTRUCTIVE PAIN.
*And a slight tendency to wee when excited. Or not concentrating. Or sitting.
3.  Newborn-hood 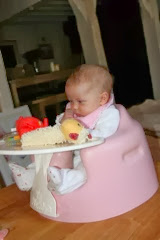 Your tits are on FIRE and every day is terrifying, it’s just that you’re too shitting exhausted to remember by morning… Also what is ‘mor-ning’…? That would imply the day had ended at some point…? Also – your house looks like shit, you’ve been wearing a dressing gown for a week and you smell a bit. And welcome to the world of perma-puke-shoulder. And faeces. In your mouth.
4.  Baby-hood 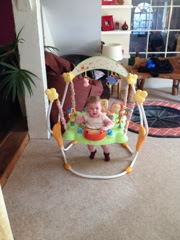 You made it through the first three months. You consider four hours a ‘good’ night’s sleep. You’ve stopped imagining you’re going to drop/harm/break your baby every time you move/feed/leave the house. You’ve actually had a haircut… you’re managing mascara at least once a week… you’ve upgraded your dressing gown to slightly crusty leggings… and you’re not quite as angry… probably something to do with rediscovering your love of AL-CO-HOL. And life by Jumperoo…
5.  Weaning and Other Tortures 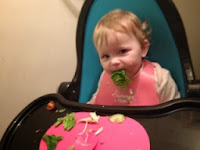 Weaning a baby is a bit like pulling your own eyelashes out with a soldering iron. Except you actually run out of eyelashes after a while… You will permanently smell of broccoli, you will always have something smeared across your face/hair, you won’t be able to smell rice-cakes without gagging and your cats will leave home after taking a ‘protest shit’ in your kitchen….
And to add insult to injury; your boobs are now being rejected, perhaps in part because they look like a couple of wonky tennis balls in socks… so enjoy that.
6.  F@*k. It’s Moving. 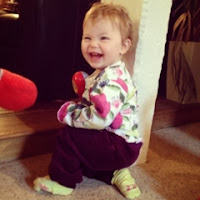 Forget everything you thought you knew about your home… you have inadvertantly been creating a DEATH-TRAP for the past 30 odd years… Coffee Table = DEATH by corner to the face. Lamp = DEATH by red hot burning of the face. Books = DEATH by paper cuts. To the face. (you get the point…) And remember when you actually left the house and stuff? Well. You won’t be doing that any more. You’ll be crying behind the stair-gate with a toblerone like the rest of us…
7.  Now it Speaks… And Life is Over… 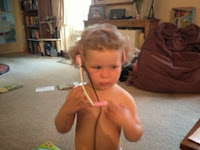 Bring wine. Take up Tanqueray. Give into CBeebies… #thatisall
See you on the Dark Side…
I know that the 8th and final stage is Potty Training but I’m ignoring that. And drinking some gin instead. Probably best…
#HouseOfDeath
#SevenShadesofShit
#GinforMums