Recently, thoughts of returning to work keep filling my head.

I’m happy as a stay at home mummy, don’t get me wrong… The day-time drinking and pyjama-party-mondays ALONE are enough to let me know my life is AWESOME.

And somehow there always is a ‘but’…

…is slurping pinot grigio at midday whilst watching CBeebies in a onesie ‘enough‘ for me…?

Right now – Yes. I like it. Who f@*king wouldn’t… It’s the future I’m more concerned about. She’s starting to talk, become independent, I can already see the signs of her needing me less and less… She feeds herself, asks for what she wants, gets her own toys, punches her own badgers… Soon it’ll be nursery, then school, the BIG school, then UNI-shitting-VERSITY… Arrrghh. I know it’s going to fly by in an instant and I’m scared I’ll suddenly be left wondering where the time went, feeling bitter about the career I pissed away so I could ruin my vagina, taste infant faeces and become a twatty nappy-price expert…

When she gets old enough to start having her own goals and aspirations I don’t want her to look at me and think… hmmm… my mum’s a slightly wonky, gin-fuelled hobo with no achievements other than an amazon prime account and a broken fanny… No. I know pretty soon I’m going to start needing more. But I also want more children… (Yes, I know. Don’t worry. I slapped myself in the face as I typed that and took a Tanqueray to the eye by way of punishment). So do I return to work now and leave producing a WallyBubba #2 until I’ve started my career up again? Or do I bash another one out quick as I can, finish my pelvic floor off for good and resign myself to the pissy-pukey-poo-fest of motherhood for another few years…?

It’s a tough one. There’s no right or wrong answer I know. And I’m probably leaning towards the latter…. (Cue another slap and gin-shot to the retina) I’m just worried about my CV after five years of full-time motherhood; I’m not sure my last role as ‘chief onesie-wearing wine drinker’ along with a cover note that says simply says HIRE ME I’M SHITTING AWESOME, is going to cut it…

Oh well. F@*k it. Perhaps it’s time to stop worrying about ‘then’ and enjoy the ‘right now’ for a bit longer… after-all once I write my blog into a book, YOU’RE ALL GOING TO BUY IT. AREN’T YOU. YES. THAT’S F@*KING RIGHT. YOU ARE.

Sooooo… Pinot-up my pint glass, Mummy is onesie-ed up and ready for an afternoon of Mega-Bloks, Lola and Crocodile Xylophone solos. And she’s going to f@*king love it. 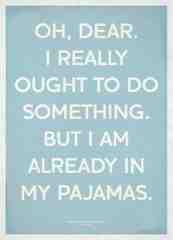