It’s come to my attention that during winter, mummies across the country get obsessed with making you wear something called a ‘hat’, and recently mine has totally lost it and bought me ‘booties’ with actual pom-poms on… (I know… it’s always the pretty ones… *tuts*)


However, there is hope yet. This presents a very real opportunity to get your mitten-clad hands the increasingly illusive car keys, wallet, remote control and yes, my fellow-chunky-knit-victims, even the coveted iPhone.


From now on refuse to wear ANY item of outdoor clothing without being given one of the ‘golden four’. I’ve included an example photo below from yesterday where in exchange for allowing Mummy to get even one pom-pom bootie on without a fight, I received 15 minutes car-key time and later on: three Rhianna tracks and 999 call on the iPhone to keep the hat on the entire way to rhyme time. Just like the olden days… Good times, good times. 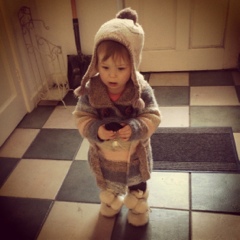 One word of warning though – decide your limits and stick to them. Mummies need boundaries or they take the piss. If mine so much as comes near me with the bear-eared-snow-suit again I’m going to rip out one of her ovaries with my teeth and feed it to the badgers.