Husband: ‘Let’s holiday in the UK this summer. It’ll be much easier than getting on a turding plane and trying to kill ourselves in 40 degrees of heat again.’

Wife: ‘OK darling. I think that sounds like an absolutely F-ing fantabulous idea provided it doesn’t rain, is actually relaxing and doesn’t cost twice as much as an abroad holiday anyway…

We re-join our couple a few days later at home:

Husband: ‘Right – so I’ve hired a cottage which required a re-mortgage and my mortal soul as payment, I can confirm a monsoon is scheduled for that exact week in July, and the baby’s just started teething so we are all go for AWESOME.’

What follows is a week of rain, more rain, the realisation that packing ‘summer clothing’ is indeed a major FAIL, a thoroughly un-enjoyable attempt at sitting in a hot-tub during yet more rain, a lot of crying (not from the baby), a lot of gin, approximately four grand spent on zoos, a family purchase of matching rain ponchos, a diet of chips (apparently this is the staple diet of people who live by the sea, deep fried sausage optional), a blocked toilet (thanks in part to the chips no doubt…), even more gin, a disturbing game of twister, a leaking roof, a balcony door adjoined to the baby’s room which hurls itself wide open during rainstorms (extra awesome), a three night stint of the incredible un-sleeping (yet still toothless) baby, consumption of enough gin to fill fore-mentioned hot-tub, a combined family weight gain of a stone and a half (chips… again), a camera with a flat battery which died after the first day and a realisation that thanks to this F-ing holiday divorce is now an expense too far.

Wife: ‘I would never go as far as to say I told you so, but that holiday sucked giant turdballs.’

Following this brief interaction both parents adopt a seated ‘ball’ position and rock back and forth disturbingly for several weeks. During this time the baby embraces basic survival instincts; learns to use a toilet, cook, clean and sends kittens out to hunt at night. No-one has seen them for a while but the rumour is the entire family now works from home for the Isle of Wight Tourist Board.

DISCLAIMER – My husband would like me to point out that this post is in no way an accurate rendition of the truth in any way. Because he is a liar. 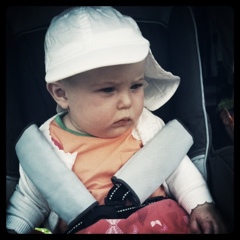