I think my child is trying to kill herself.

Well, perhaps not kill herself, but experiment with how close she can come to death without actually stopping breathing.

And has meant everyday activities are now rather more exciting…

A simple stroll to the park will involve her taking on an alsatian, garrotting herself with her reins, then upon reaching the playground – an impressive attempt to impale herself on the perimeter fence will announce the Wally family has arrived. Usually to a chorus of tuts from some old people.

WallyBubba is also the inventor of the new playground sport for under 2’s aptly named ‘Stand-up Swinging’, and yes, this is EXACTLY as you are imagining it. This involves her repeatedly attempting to become vertical whilst flying through the air on the toddler swings as I frantically attempt to catch her whilst crying. The judgemental-pensioner-tutting goes up a level at this point…

No matter how many times I explain to here there are less painful ways to use the slide, she still insists on coming down on her face. Leaving a trail of snot, skin and tears as she scrapes down via her cheekbone. Unfortunately the same also applies to stairs. It’s impressive.

Please don’t ask me about what happens at soft play… let’s just say my child brings a whole new meaning to the word kamikaze… and we are barred from most… like PubWatch. For toddlers.

Last weekend we took her swimming and despite being prepared with enough buoyancy aids to rescue a fleet of otters, we hadn’t banked on her giving herself an impressive black eye whilst getting out of the car. She didn’t actually seem bothered. She seemed more… proud…

She has an actual immunity to falling over. It’s not falling – it’s simply a way to test the solidity of various hard surfaces with her face. I’m fairly sure she’s on some kind of mystical baby quest to get her first full-blown concussion before she hits 18 months.

I’ve resorted back to blunt rubber cutlery, as providing her with a grown-up knife and fork apparently prompted her on a journey into self harm. And cat harm. And Mummy and Daddy harm.

Story time has to be fully supervised to ensure she doesn’t tear out the pages and begin paper-cutting the skin between her toes to an audience of variously sized Peppa Pigs.

She can also regularly be found attempting to eat glass and radiators. Which is scary. But not as scary as not being able to shake the thought that one morning I’m going to wake up, and she’ll just be there… standing over me… with a yoghurt spoon in one hand, and one of my kidneys in the other… 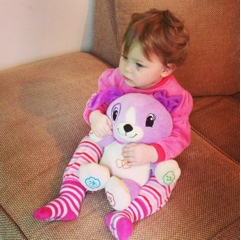 Toddler Versus Supermarket… The Ultimate Guide to Breaking …
April 24, 2014

The Curse of the Pizza-Eating-Toddler
March 3, 2014